There are certainly things to do around Ullapool, but let’s just say that, like us, at this stage on your road trip you may have become a little spoilt. Ullapool itself is far from the most inspiring place on any North Coast 500 route, but it’s still an incredibly useful pit stop. Thankfully, there’s a plethora of thunderous waterfalls, gorgeous bays and towering hills to ogle at in the surrounding area. A brilliant range of Grahams, Donalds and Munros also means that there’s hiking for visitors of every level.

Things to Do Around Ullapool

If you’ve been following our North Coast 500 Alternative Route, then you’ll have just come from Lochinver. You can read up on everything there is between in Assynt and Lochinver in Part 4 of our NC500 posts.

WEE TIP: if, for some reason, you have to ignore our expert, know-it-all advice and end up taking the quicker route, then it’s seriously worth the detour to Loch na Gainmhich (the Wailing Widow Waterfall). Find out more about it in Part 4!

One of the first things to do on your way to Ullapool is stop off in Inverkirkaig. It’s a tiny place and one you might pass by, unless you know to stop and visit the Falls of Kirkaig. It’s a 4-mile round-trip walk through glorious wooded glen, arriving at the surprisingly powerful waterfall. Be sure to follow this route from the ever-dependable Walk Highlands. Even if waterfalls don’t wow you, the breath-taking views of Suilven, Canisp and Cul Mor will. You should also be able to see the outline of the next in the list of things to do from Ullapool: Stac Pollaidh.

Stac Pollaidh is a famous hill in these parts, and bursting full of character. It may sit a mere 612m high, but it’s an enjoyable and straightforward walk. You’re rewarded with outstanding views of Assynt and the hills surrounding it. This is reached on the coastal route from Lochinver, and that’s why we recommend taking the long road.

Often referred to as ‘Stac Polly’, there’s no doubt this walk is one of the best things to do on your journey to Ullapool. While Suilven, Quinag and Ben More Assynt are serious undertakings, this walk suits visitors of just about every level.

It’s impossible to miss the spacious car park at the foot of the hill. Once you start walking, you’ll come to a crossroads and need to decide if you’d like to continue around Stac Polly clockwise or anti-clockwise. We chose to walk anti-clockwise, and recommend that you do too. 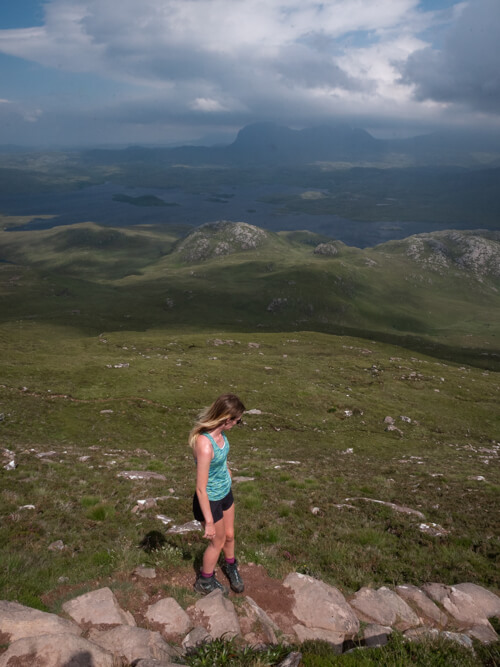 This means that you’re walking the slightly better path around the back of the hill, and taking the harder path downhill on your return. On the opposite side of the hill, and out of the wind, you begin your short but steep ascent to the top.

There’s a cairn on the central ridge, and a couple more on the eastern peak. These aren’t the true summits of Stac Polly, but are generally accepted as the peak of the walk. Those feeling more adventurous (and with the technical experience) can continue to the true summit on the western side of Stac Polly.

Be warned that this detour can involve some tricky scrambling, and in poor conditions would become technical. Much of the rock face has been battered by the elements and is crumbling. It’s considered extremely dangerous to climb up to this peak (and you do actually have to climb through a sort-of tunnel at some point). 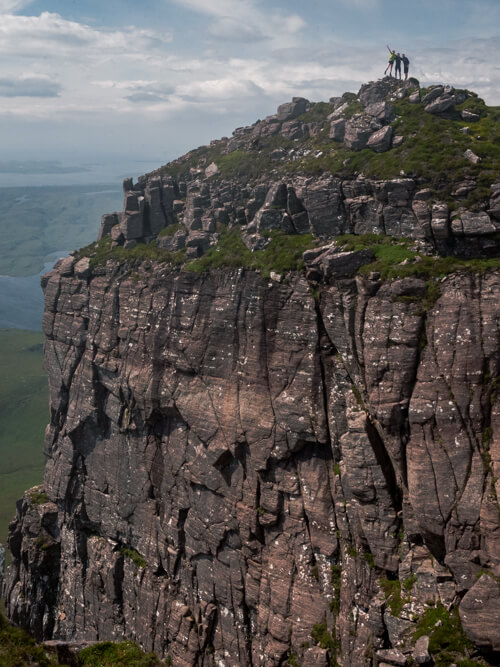 Despite an obviously wise, knowledgeable, truth-telling old lady letting it be known that we were ‘stupid idiots’ for braving the life-threatening, rocky ridge, we made it to the true peak and back without issue at all. It was a miracle.

Seriously though. For others, we wouldn’t recommend the walk to the true summit. The eastern one does just fine, and the views aren’t bad there either.

Learn About Geology at Knockan Crag

Ok, even we admit that learning about geology doesn’t sound particularly cool. But the information, displays and views at Knockan Crag National Nature Reserve make it absolutely worth a stop. There’s absolutely loads of information, intriguing displays and voiceovers in both English and Gaelic.

First of all the elevated car park has incredible views of the Assynt hills from another perspective. You’ll be able to spot Stac Pollaidh, Suilven and more from the other side. There are fantastic public toilets too, for anybody in a campervan!

There are a series of walks to suit every type of visitor, and since we were pressed on time, we only made it to the Globe Slate Structure before turning back. Ideally, we’d like to have had more time to climb up to the ridge and the best viewpoint. That’s also where the most interesting rock faces are too.

As it turns out, Scotland was actually once part of the same land mass as North-East America. Pretty cool, right? And, unusually, the older rock formations have managed to sandwich the new rock formations in an incredibly unique way. Pretty cool, right? This puzzled geologists for years, and some people believe that the study of the rocks at Knockan Crag was one of the most important discoveries of the past century. See? Geology’s cool…right..?

After you’ve stocked up in Ullapool, you’re just a short drive from another one of the top things to do in the area. Continuing south on the A835 you’ll see signs for the turn-off to the Corrieshalloch Gorge Nature Reserve. Thankfully, this is also the way you’ll be going if you’re heading towards Gairloch.

After you’ve parked (there’s an expected donation of £2) you have two options. You can decide to do the Fern Walk, which takes you to a viewpoint of Loch Broom, before continuing around the circuit and skirting the near side of the gorge. You’ll need at least an hour for this one.

If, like us, you don’t get too excited by ferns, then you can aim for the simpler and quicker walk which takes you straight down to the gorge. You’ll cross a bridge over the gorge which in itself offers fantastic views. Heading a little further down the path you’ll come to a designated viewpoint. All in, you’ll be back at the car in around 20 minutes. It’s certainly worth seeing but if you missed it, you won’t be losing any sleep.

Climb Some Hills from Shenavall Bothy

Now for the real treat! This is one of the top things to do in the Ullapool area, regardless of the trip you’re on. We had huge (and unrealistic) plans as we set off on our trip. Sure enough, injury and illness began to appear and frustratingly we weren’t able to do as many walks as we wanted to.

Initially, our plan was to head to Shenavall Bothy, regarded the most beautiful bothy in Scotland, and spend the night there. Then we would take on the Fisherfield 6 and probably spend another night back at the bothy. Alternatively, you could take on the mighty An Teallach, with the same bothy as your base.

Legendary among walkers, the Fisherfield 6 is regarded as the most beautiful circuit in all of Scotland. These are the country’s most remote munros. That really takes some doing. Be aware that it’s a serious walk, and not for the faint-hearted. The full walk, taking in 5 munros and a corbett, covers an astonishing 18 miles. With 2,254m of ascent, you’re going to have some tired quads on the way back. Find out everything you need to know about the route here.

An Teallach, and the two munros on its ridge, is another walk considered to be among Scotland’s finest. This is a slightly less insane undertaking, but still a challenging walk. Outstanding views, fun scrambling and another memorable day on the hills. Check out the route and see what you think.

If you’re not staying in fabled Shenavall Bothy, then you can whizz ahead to Gruinard Bay just along the road. This is another beach on the North Coast 500 which constantly makes the ‘top beaches’ list. It’s easy to see why.

Gruinard Bay is the name given to the whole area of mountain, water and cove. Pretty Gruinard Beach, with free parking, is the most popular beach in the area. A little further along the coast you’ll come to Second Coast, and after that you’ll find First Coast. We couldn’t find an easy way down to the water from either of these spots, so if you do, please leave a Comment and let us know if we missed something.

There’s an unbelievable viewpoint with a large, designated lay-by a little further up the hill:

The views were amazing, and perfect in the sunset colours. We decided to camp on Gruinard Beach and everything looked good on paper. Easy access from the car park, a long, beautiful and clean beach, and lovely water to swim in.

Unfortunately, that night the biggest swarm of midges ever known to humankind decided to set about us. We did our best to get the fire going, spray anything we could spray and cook up our food. But after a heavy day of rain and with no wind to help us, we got absolutely destroyed. Running around the beach trying to stay mobile and avoid them, we eventually had to give up and stare at our tent walls for a few hours instead. Maybe it’s something to do with the radioactive Gruinard Island. Hopefully you have better luck.

Seafood’s hot on the menu in most Ullapool restaurants. There isn’t too much in the way of good coffee, but if you’re after basic muffets of tea or fish and chips, you won’t go wrong. At the weekend there’s a lively atmosphere in Ullapool. If you’re in luck, you’ll find a ceilidh or other live music at The Ceilidh Place.

There’s a good range of accommodation in Ullapool with hostels, bunkhouses, bed and breakfasts and hotels.

Further down the coast from Gruinard Bay there’s the Gruinard Bay Caravan and Camping Site. I’m sure the site’s lovely and very well-equipped. But we were pretty annoyed when they wouldn’t let us fill up our personal water bottles. That’s for guests only apparently. Fair enough, we all know how expensive water is in Scotland.

WEE TIP: if, like us, you’re needing to re-stock on fresh water after a long day of exploring, you’ll find some perfectly good public toilets up the road in Aultbea. Thanks to the kind local cyclist who pointed us in the direction after we dared ask the Caravan Site for a quick top-up.

And there you have it! We won’t lie, scaling some of Scotland’s biggest and best hills is one of the top things to do around Ullapool. If you’re not a climber, you’ll still enjoy waterfalls, simple walks and more gorgeous beaches.

If you’re continuing to follow our North Coast 500 Alternative Route, then keep reading to check out Part 6: Ullapool to Gairloch. Heading the opposite way? Then Part 4: Scourie – Lochinver is what you’re looking for. Safe travels!

The above budget is for x2 people. Food and alcohol prices are likely to vary. We drank our fair share, and had plenty of pub food.

This budget breakdown isn’t meant to be an exact record of what we spent, but should give you a rough idea of what you’re likely to spend. 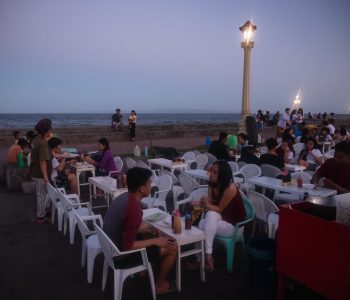 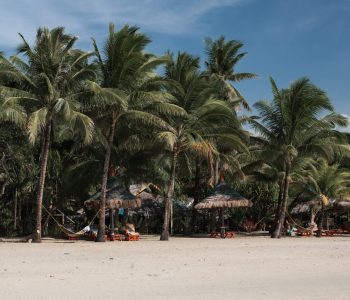 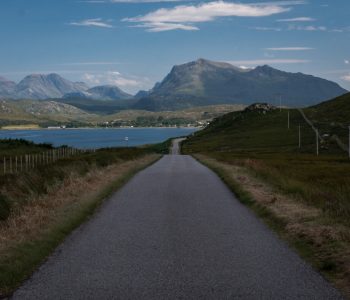 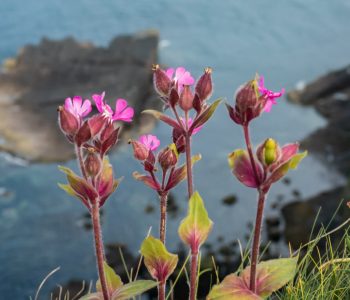 WIT: A Guide to Handa… 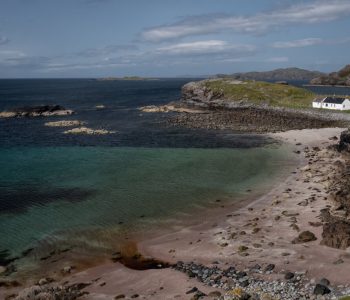 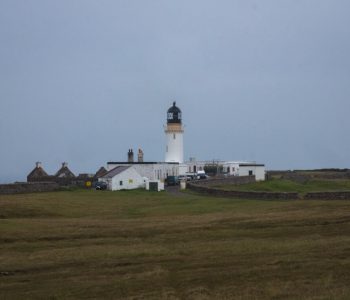 WIT: How to Visit Cape… 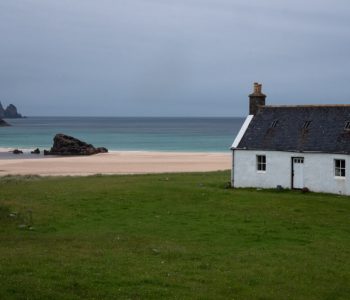 WIT: A Guide to Kearvaig… 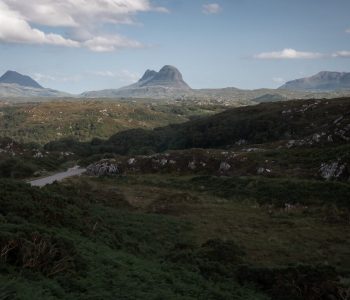